The Darwin Centre at the Natural History Museum is a state-of-the-art science and collections facility opened in 2009 by Prince William. Ten different types of complex touchscreen kiosks, featuring videos and games, are positioned throughout the cocoon shaped building. I was contracted by On101 to work as lead developer for the front-end build of the kiosks for the duration of the project. 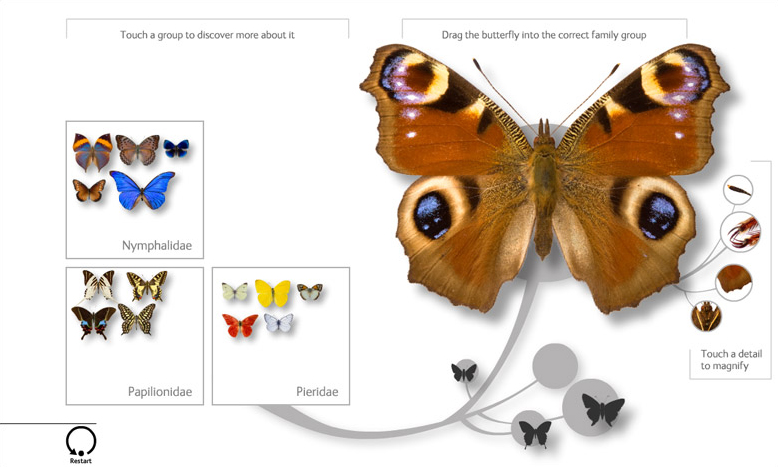 Click on one of the images below to view examples of animation for the kiosks at the start of the DC2 tour. Please note these animations were designed for dedicated machines and may run slower on a standard pc.

The last of these three animations (above) is in ''debug mode'', and shows the dynamically rendered bezier curve which tracks the ''top-down'' camera.

Most of the touchscreen exhibits in the Darwin Centre involve video playback in response to user interaction. Playback is triggered either in the touchscreen display or on another screen via a LocalConnection object. For the video player, I forked a version of the JW Player and built a timed text caption component and simplified playback bar on top. Each video operates with a captions XML file.

All of the touchscreen installations at DC2 have a bar-code scanner. Visitors can collect data from each kiosk using a card with a bar-code, and then review the information on the Natural History Museum website when they get home. This process required hardware and server-side coding, working extensively with the NHM IT department.